I joined the US Air Force in December of 1988. I was serving at RAF Upper Heyford outside of Oxford, England when the United States initiated Operation Desert Shield to contain Iraqi aggression. I was deployed to Incirlik AB, Turkey for Desert Shield, and subsequently for Operation Desert Storm–the combat operations that liberated Kuwait from Iraqi occupation.

I had the privilege of serving in the 7440th Composite Wing, a first-of-its-kind effort to form an autonomous, cross-functional Air Force unit. It was a philosophy before its time, and one that now forms the foundation of the DevOps movement.

I wrote about the success of the 7440th Composite Wing in a post for DevOps.com:

One of the pillars of DevOps is the obliteration of traditional silos, and the ability for cross-functional teams to work together to just get things done. While the concept may be new for developers and businesses, the United States Air Force already demonstrated the power of this philosophy during Operation Desert Storm more than 20 years ago.

The US Air Force is configured primarily in separate units, or silos. Generally, a base or wing is comprised of a single type of aircraft. C-130 transports, KC-135 refueling planes, F-15 fighter jets, A-10 ground engagement aircraft, and F-111 bombers each had their own base of operations, and separate command and control infrastructures. During Desert Storm, though, a new Composite Wing was formed, which included a cross-section of all of these aircraft and Air Force resources tasked to work closely together with one chain of command.

Air Force Brigadier General Lee Downer wrote about the formation of, and experience with the Composite Wing in anairpower journal article in late 1991. In essence, by removing layers of red tape and bureaucracy, and putting all of the required assets and resources under one command, the 7440th Composite Wing was able to operate with unprecedented efficiency and effectiveness.

Downer concluded with these thoughts: “The 7440th Composite Wing’s achievements are now a part of history. The efforts to get the wing into the war are a special success story that should be told in more detail in the future. As is usually the case, once the decision to go was made, the success of the effort was up to the people who were tasked to make it work. Their accomplishments clearly show that they assumed the challenge with a great deal of enthusiasm and skill. They knew their jobs, did not hesitate to make decisions, and kept improving the operation as they became seasoned and experienced.”…

You can read the full article at DevOps.com: The US Air Force was doing ‘DevOps’ before it was cool.

Here is a picture of me striking a pose in front of an ALQ-131 Block II ECM pod–the equipment that I spent my Air Force career maintaining, troubleshooting, and repairing–while at Incirlik AB during Operations Desert Shield / Desert Storm. 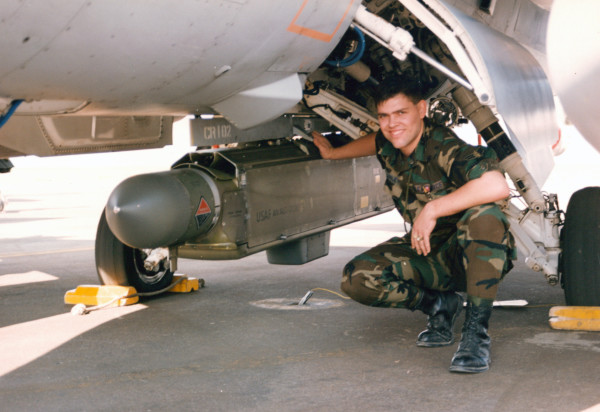