This is the first in a series of three articles that will review the Amazon Echo device and it different features and capabilities, and the Echo’s place in our technological universe. The first will cover some of the basics you’ll experience in getting it set up and working in your home or office. The second will cover the interactive features and some ways in which the Echo does (and does not) fit into one’s day. The third will cover smart home features and connectivity.

As a veteran of bleeding-edge technology promises—and having felt the thousand cuts of promises not kept—I was careful to moderate my expectations of the Amazon Echo. This meant that I expected a relatively new product on the market to have some issues in usability, with voice recognition historically being one of the most challenging for a mass-market device. Additionally, interoperability with other devices has always been a somewhat limiting factor in technologies that claim to be able to tie together as many disparate elements as the Echo does. With these expectations in mind, I proceeded to unpack the device and get started.

Normally I wouldn’t mention taking a device out of the box. I don’t get the draw of “unboxing” videos that litter YouTube and I don’t see packaging materials being worthy of column inches. However, in this case, I’ll make an exception.

What is remarkable is the lack of unnecessary packaging and accessories. The box contains the Echo device, a power adapter, and a quick start card. That’s it. If you’re used to opening a new device and having a small library of manuals, disclosures, and registration cards, along with a dozen or so accessories and charging cables, etc., this is refreshing. Just the stuff you need.

The Echo device is about the size of a can of Pringles potato chips and the provided adapter is about 2 meters long. Simply attach the power adapter and you’re ready to go.

Setting up the Echo device is relatively simple, if a bit un-intuitive. First, you must have a mobile device to perform the initial configuration of the Echo. This is done by downloading the Alexa app for your specific device. Versions are available for Android, iPhone, and Windows mobile devices, but surprisingly, not for Windows computers. I used both the Android and iPad versions of the Alexa app and was even able to use both simultaneously. Thankfully, once you have the app(s), the rest of the configuration is easy.

When first turned on, the device appears to be in listening/pairing mode. Launching the Alexa app will first take you to a screen that asks you to locate available Echo devices. Click a couple of “Continue” prompts, configure WiFi access, and your device should be ready. The Echo device registration is tied to your Amazon account and all of the default service configurations are reliant on the associated Amazon services.

When we see the Echo in advertisements, we see it playing music, answering questions, looking up stuff on the Interwebs, and managing our day. The reality is not far from that, but with a whole shipload of caveats.

One of the first things I had to deal with was what to “call” my Echo. The Echo uses a “wake word” that causes it to start listening, and the default wake word is “Alexa.” It can also be reconfigured to use “Amazon” or “Echo,” but this feature is not otherwise configurable at this time. Personally, I’d prefer to be able to just say “Computer!” like Capt. Picard in Star Trek, but alas, we are currently denied.

Simply saying the wake word causes the Echo to start listening and you can tell the Echo has heard you when the LED ring around the top lights up blue. The Echo comes with a sort of quick access card that has some sample interactions you can have with Alexa. You can say “Alexa, what day is it?” and Alexa will tell you the current date. So far, so good.

The Echo device uses far field voice recognition that includes “seven microphones and beamforming technology,” which sounds oddly like a refrain for “two turntables and a microphone.” But it works, and it works REALLY well. I have the Echo device placed on the coffee table in the living room of my apartment. I have a relatively open floor plan with about 1000 sqft of living space and the device is located towards one side of the space. While playing music (more on this below) I was able to go into the kitchen area (opposite side of the apartment) and make a cup of coffee. While waiting for it to brew, I said “Alexa” using a slightly above-normal-volume voice and the device responded immediately. And it always responds immediately. Even low-volume voices are picked almost as readily as regular conversation volume.

And this reliability carried over into other voice commands. I was able to query the weather, date/time, and other basic functions without any issue. The biggest problem I faced was learning how to structure my commands so that Alexa would understand them. But here’s where some rough spots came into view.

I wouldn’t chalk this up as a failure of the Echo device. It seems more an issue of understanding the diverse ways we want our information (summarized or detailed, 12-, 24-, or 36-hours, etc.) than it does in recognizing the actual query. This is also something I would expect to see addressed at some point in the future as the Echo evolves.

More to the point with recognizing voice commands, the Echo device uses “skills” to recognize voice commands. A “skill” (in Echo parlance) is a set of learned voice commands around a specific feature, technology, or service. Most skills are developed around basic question:response mechanics, such as asking Alexa to tell a joke (or a particular kind of joke), get a random famous quote, or start playing “Dog Trivia” (seriously). Other, more useful skills are built around accessing stock quotes and other financial data (GDP, LIBOR, etc.). All skills are enabled/disabled directly in the Alexa app, making it easy to experiment with different things. I have yet to find any that really stick out to me as being especially noteworthy, but it is clear that there is a lot of room for this area to grow. Significantly.

More on this in the next part of this series.

I started with music because all of our technology starts with, or revolves around the soundtrack of our lives (original iPod, anyone?).

If you have an Amazon Prime account, you can immediately listen to music via your Amazon Prime collection by just saying “Alexa, play Prime Music.” More specific requests allow you to select artists, playlists, or genres. The Alexa app allows you to configure your Pandora account and you can access it by simply saying “Alexa, play Pandora.” There’s also support for Spotify, iHeartRadio, and TuneIn. The Alexa app can also be used as a remote to select/skip/repeat tracks.

If your music is wrapped up in iTunes, it looks like you’re currently out of luck (one area that may be a deciding factor in choosing between “Alexa” and “Hey, Siri”)

The speaker system on the Echo deserves special note. The overall music quality is surprisingly good and able to fill a large room without sounding overly tinny or distorted. It isn’t audiophile quality sound, but it is better than what you would likely expect for the overall form-factor. I’ve used Bose and Sennheiser portable speakers in the past, and the Echo seems to deliver better overall sound quality than the Bose (to my ear), especially at higher volume. There isn’t really competition with the Sennheiser.

Adjusting volume is also accomplished with voice commands (or turning the volume ring on the device). Calling the wake word with a volume level (between 1-10) causes the volume to adjust accordingly. Simply saying “volume up/down” causes it to adjust volume by one step. And even at increased volume levels the Echo still hears its wake word from across the room.

Reviewing the Echo simply as a music/entertainment device, it stacks up well against other similar technologies. But it is Echo’s added functionality that really sets it apart from other pretenders that simply can’t offer all of the other bells and whistles that Echo has. 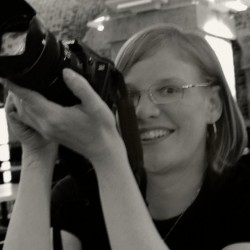