Implantation with a nanochip… Doesn’t that sound like a fascinating concept?!

While this concept may seem like a plot directly out of a science-fiction novel, it happens to be a reality. Earlier this summer, a Wisconsin technology company, Three Square Market, offered its employees microchip implants to scan into the building and purchase food at work. The tiny chip, which uses RFID technology or Radio-Frequency Identification, can be implanted between the thumb and forefinger “within seconds,” according to a statement from the company. Though this technology may seem like a way for the company to keep track of its employees, the microchip does not have GPS, and its goal is to offer employees convince, a way for them to bypass using company badges and corporate log-ons to computers, and to go card-less with purchases on the Three Square Market campus. Whether or not to get a chip is strictly up to the employee to decide.

Can humans be hacked?

The news out of Wisconsin comes with it many natural questions – especially ones around what a company with this technology could do with the data. Ideally, they are providing an additional benefit to employees, but we have all heard of misguided outcomes. Even worse, that data could find its way into the wrong hands – that’s the Pandora’s box that this technology has just opened.

Will this trend of microchipping humans continue with more companies? What does it mean for our current relationship between human and technology?

The evolution of human-machine interface

Though this connection to a computer seems jarring, in reality we have more sensors in our cars than on our person, especially if you look at the vehicles on the road today. Physiologically, we use body language and medical systems to give us index on what’s going on internally. The idea of beginning human embedded devices first and foremost will have positive wellness benefits as we’ll have the ability to more adeptly monitor vital signs on a daily basis. Preemptive measures can be preserved and extended.

The idea of implanting, ingesting or embedding sensors on a human as an enhanced machine interface so we can graduate from today’s primitive interfaces (cell phones), is bound to eventually happen. It’s just a natural step in putting our minds online. The idea of beginning to monitor people’s behaviors or identity, and collecting data in the workplace using IoT and sensors, has to be something both employee and employer agree to. It’s one thing to have a very efficient human-to-machine interface that connects and disconnects at will with consent. Quite another, if employers are implanting devices that are activated and monitored without employees’ consent. Furthermore, it opens our society to a dangerous amount of unauthorized “hacking” into our person. The moment we become digitalized in a moment way, we become a target as well.

Should we be concerned?

Just as Elon Musk cautions about the global race for artificial intelligence, the quickly advancing realm of technology will never cease to surprise and concern us. However, these developments are not necessarily anything different than what we experienced in the last 50 years. It’s simply more jarring because its happening much faster. Technology development and commercialization cycles are compressing at an exponential rate, and that’s what can be unsettling to most. At the end of the day though, these technologies, including artificial intelligence and microchips in humans, are extensions of human-machine interfaces, an interface that puts your brain online.

We’re living in an exciting period in recorded human history. It’s a period in which for the first time, almost everybody on the planet will have access to technology. However, the speed of which the technology is developing means that we will have to go through some traumatic and possibly painful transitions. This is where governments and the largest exponential corporations on the planet have a responsibility to come together and mitigate the obvious. Those are the behavioral and societal traumas that will create greater disruptions if left unattended.

Overall, we are transitioning into a better period of higher quality and greater abundance, be it in terms of quality of life, connectivity, cognitively and all these enabling technologies. 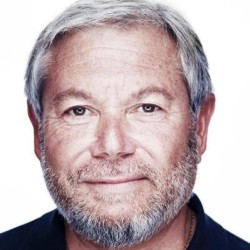 Avi Reichental
Since 2015, Avi Reichental has served as the Founder, Chairman and Chief Executive Officer of XponentialWorks™, a venture investment, advisory and product development company focused on seeding and scaling high-tech companies that are creating and disrupting the connected world. A lifelong visionary, Avi has spent a career foretelling the convergence of technological trends while highlighting the unlimited possibilities of exponential technologies. Additionally, he has been a leading voice around the potential exhibited in deep learning, robotics, and 3D printing. As such, his insights have been sought out by numerous organizations, including at Harman International, where he served on the board up until their 2016 acquisition by Samsung.

Avi spent the previous 12 years guiding 3D Systems as President, Chief Executive Officer and Director. Under his leadership, 3D Systems emerged as a leading provider of 3D-printing services, along with becoming a leading voice in the industry. His TED speech, titled “What’s Next in 3D Printing,” still receives acclaim for its industry perspective. Under his watch, the company also realized significant revenue and valuation growth, and ranked 13th on Forbes’ list of the World’s Most Innovative Growth Companies in 2014, as well as Fortune magazine’s fifth-Fastest Growing Company and second Fastest Growing Tech Company in 2013.

Avi also is an active inventor who holds 25 patents.